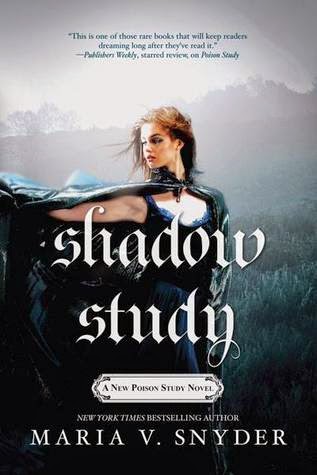 This is by far one of my favorite series, so when it came time to read this book, I was beyond excited. This book held so much mystery and adventure that I found myself absorbed into the world again. I thought I would have trouble reconnecting with the characters again because it’s been so long since I’ve read the previous books but I was thrown immediately back into the heads of my beloved characters. I was just as much invested in their health as the characters themselves. So yes this book was definitely one of my favorite of the year so far.

Once, only her own life hung in the balance…

When Yelena was a poison taster, her life was simpler. She survived to become a vital part of the balance of power between rival countries Ixia and Sitia.

Now she uses her magic to keep the peace in both lands—and protect her relationship with Valek.

Suddenly, though, dissent is rising. And Valek’s job—and his life—are in danger.

As Yelena tries to uncover her enemies, she faces a new challenge: her magic is blocked.

And now she must find a way to keep not only herself but all that she holds dear alive.

This was a story about not only Yelena but her friends too, Ari and Janco. It was definitely an adventure for everyone and Yelena gets attacked in the beginning of the book and she somehow loses her magic which makes her that much more vulnerable. For the rest of the book she’s looking for the assassin and a way to unblock or bring back her magic. But on Janco’s side he’s trying to bust the people on the black market, of course, with the help of a wannabe assassin and Ari. Then there’s Valek always up to no good if you know what I mean! So overall the plot had plenty of surprises and was filled with good times.

The obvious romance in this book is Yelena and Valek. Their romance was just as cute and amazing as it has always been. They had their separation in the book while they all did what they had to do for their careers. But even apart you could see the love between the two. As for secondary romance I might have seen a possible budding of romance but I’m not quite sure only time will tell.

I loved all the characters in this book even the villains. Ari, Janco, Yelena, Valek, Onora and so on are some of the characters that I found amusing. My point is that the characters were easy to connect with and lovable.

Yelena obviously did a lot of transforming in this book. She is portrayed as weak in the beginning of this book but slowly and I do mean slowly she starts to build up her other strengths and she isn’t so weak anymore.

This was written in first person and in several POV’s. The main POV’s written in was Yelena, Valek, Janco. The author’s writing style hasn’t changed since the other books which was another thing I was worried about. But I was just as emersed in this book as I was in the others. Definitely a type of writing that will have you hooked.

Quote of the book:

“He leaned forward and pressed his lips to mine. Before I could deepen the kiss he pulled back.

“No more until you’re better.”

I really enjoyed this book and loved revisiting all my old characters and the places they resided. I also enjoyed getting to learn more about Valek’s past and how he came to be who he is now and where he is now. The ending left off with a mild cliffhanger but it still had me in shock for a while. Anyways this was an awesome book and I would totally recommend this to an young adult reader or romance reader for that matter!

Posted by Laceyshoelaces at 8:00 AM 3 comments: