The Ballad of Songbirds and Snakes (Hunger Games #0) 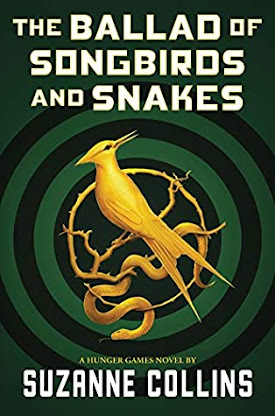 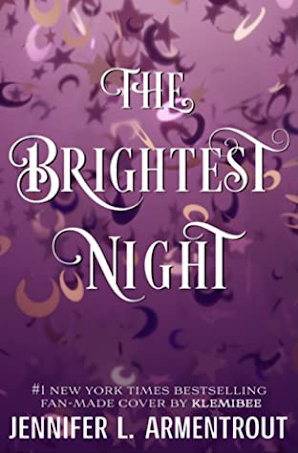 I was anticipating this the moment I finished reading "The Burning Star (Origin #2). This series is addicting. I love Ms. Armentrout's writing. She's not just a great writer but amazingly creative. This book did not disappoint and the ending? OMG! I did not expect to cry while I read through the book but boy did the tears flow. So be prepared and get a box of soft Kleenex's and be prepared for an emotional rollercoaster of a story.

Evelyn's life has done a complete 180 since Luc came back into her life.  She's no longer the person she used to be and more conflicted than ever before except about Luc...Luc...Luc...she could never be conflicted about Luc anymore; right?

Both Evelyn and Luc are on the run. They find solace in a secret compound formed to protect the "good guys". But with a secret compound comes greater conflict. Evelyn's considered dangerous after her "transformation" but her heart is good. How do you convince the good guys that your good too?

Soon they find themselves in the fight of their life, their paths twist and turn so much that it's hard to see the path meant for them, in the end will Both Evelyn's and Luc's path go side by side or will they twist so much that they break apart?

Join in the rebellion, your new family is waiting for you....

So much happened in this book. The plot was amazing, sometimes predictable but the ending was anything but. This has a pretty fast pace, though some believe it to be a little slow at times. As for me it's anything but. Ms.Armentrout's writing is like a drug, I can't get enough of it. This was 512 pages of pure ecstasy, an adrenaline rush at every turn. You learned more about Eve's "abilities" and even more about Luc. There was a lot more you learned not only about the characters but about the world itself. You have to read the first 2 books before reading this one or you'll be confused. This is another notch on the bedpost. It builds on from the first 2 books. I don't want to go into too much detail on the count it's best experienced from being the reader but be prepared for deep slumbered emotions. You might think what's going to happen won't affect you but oh will it! Don't say I didn't warn you!

Evelyn's and Luc's relationship is one of fairytales. The love between them is so sweet and deep that no one could ever doubt they were meant to be together till the bitter end. Everyone craves that so sweet love that Eve and Luc have. But behind every picture perfect love comes...complications. The end will leave you gasping and confused. Be prepared!

Luc is such a lovable character at times and also frustrating at others. And Eve? She has a heart of gold but seems to doubt herself more than she does to the new people she meets. The compound they end up in brings on almost a whole new set of characters, each donned in their own personality and life. I really enjoyed meeting some old characters as well and some that were named in the previous 2 books but were only met in this one. They created this world and together they made something special. Each character had their own but necessary role. Some characters I hated but not any fault from the author more as it was on purpose. I fell in love with some characters as well, especially Grayson. It took awhile but once I found out more about him I can't all but love him. Zoe was there and so was Damien. All I'm saying is this book added so much more in-depth characters! You just got to see for yourself.

A lot of the characters transformed in more ways than one. Luc was still lovable but different by the end (nope! You can't get the reason out of me I swear!). Eve did some changing but was still just as lovable. I wouldn't really say this was the strong point of the book except for one character; Grayson. He had this whole other side to him that comes out slowly, chapter by chapter.

There's a lot of emotional description in this book. It's sharp at times and smooth at others. I loved the description of the disserted city, it was so well written and easy to imagine. The compound they stay at is well described also, you can picture each little fine detail that it's like you're actually there. But like I mentioned above, the emotional description has got to be one of the best parts of this book. Without the emotion this book would fall flat. I got into each characters head, some by other characters conversation and some from the main point of view. But it's exciting at parts and devastating in others. I don't really want to ruin this book for you so I'll just leave it as this; without one tiny grain of sand in the oyster there could never be the pearls of the book.

Loved the writing!! I know it might sound redundant but I can't stop saying this author knows how to write! She's creative and very talented. This was written in Eve's point of view. You got in her head and it allowed the audience to have some secrets hidden to create a more exciting and fun story to experience. It was written in first person so you really got into Eve's head. Though I wanted to get in Luc's head. He's such a complex and complicated character that it would be amazing to get a glimpse into his head; what makes him tock? Though I must admit most of the time the reasons behind his decisions lies in the heart of the one he loves the most. I enjoyed this book to the very last page but the author's decision at the end left me itching to want to read the next book and I don't know when it'll come out. Just the two dreaded words, "Coming soon."

Quote of the book:

"I rested my cheek against his shoulder. "Do you think he will come back?"

"Because after meeting you, I don't see how anyone could stay away.""

I cannot wait to read the fourth and final book. I want it to be published already but again I don't. I don't want to have to say goodbye to such a great cast of characters. And this world? Though I personally wouldn't want to live in it, I still want to see it expand. I want to see just one book where there's no issues just pure bliss. Guess you can't get everything you want. Am I the only one wanting a book like that? Huh? Guess so...

4 Blooms (the ending caused that last bloom to fall to the ground, along with my tears.)

Posted by Laceyshoelaces at 1:28 AM No comments:

The Duke and I (Bridgertons book #1) Review 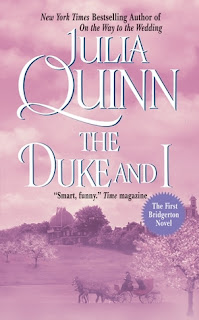