Vengeance of the Wolf Review & Interview 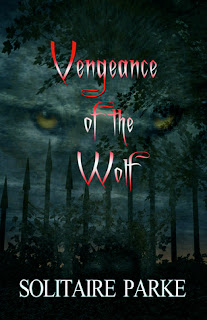 
Add it on Goodreads


Buy it on Amazon or B&N


I’m usually not one who’s interested in the cop type books but this book was so different and creative that it was nothing like I expected. The whole concept and suspense was really good and kept me on my toes. This book really reminded me of the concept of the movie “Inception”; meaning it dealt with the dimensions of the dream world and created outrageous and cool boundaries…definitely a unique and interesting read.


I really enjoyed the plot and backstories; they were creative and so different from what I’m used to reading. I felt that the book had all the usual elements we expect in a traditional plot, the ending was very satisfying and I loved what it was hinting at (I’ll leave you to see what that is) One thing I found I had to do was stop reading this book about 40 percent into it, it just kind of got to me…Kind of freaked me out and I decided to read another book before finishing this one up and thankfully I was able to do just that. But what I discovered was that the last half of the book was even more morbid and freaky and it really kind of made me want to finish the book even more quickly…there’s not many books out there that can really get to me but the way things unfolded and the reasons behind it really kind of had realism to it. It’s like there’s a person out there in our world that has this same thinking pattern and it really makes you think what could happen.  As for the pace of the story it kind was slow to me, there was plenty of action though don’t get me wrong but for some reason maybe because of the content and how it got to me but it was a slower read to me but I think it would be different from reader to reader. As for the sub-plots there weren’t many of them, it was mainly just one big plot that bounced from POV to POV, it all ended in one big resolution. So overall the plot was good and definitely one that can mess with the mind.


There was essentially very little of this in the book, there was a small romance that is worth mentioning but it’s none of that over dramatizing romance we see so much in YA these days. But the romance was soft and low key in this book and I really enjoyed this aspect, it’s getting kind of old reading about the romance between a couple and something coming between them....I much prefer this kind of romance, it’s not the main focus of the book but it’s still there, soft and gentle. So overall I enjoyed this aspect of the book.


The characters were definitely created with care, some were livelier than others and some were more focused while the others were kind of fuzzy. I really enjoyed the antagonist, it was really cool to get inside the mind of a serial killer, to be able to really get a feel on how he thinks and his reasons behind his actions; super awesome. I also felt that the antagonist or “Uncle Sam Killer” had a lot of detail that went into creating him; he had many layers and emotions that helped connect the reader to character. As for some of the protagonists some I enjoyed and some I didn’t, I liked Williams, he had a lot of guts and personality to him that really made him realistic but as for some of the others they just kind of just fell flat to me for some reason, it wasn’t because of how they created but maybe of the role they played in the plot. But overall each character did fit well into the story and all were necessary in the overall plot of the book.


Transformation of the Character:


This wasn’t really an important role in the book; there weren’t really any transformations that took place. It really focused around releasing the characters qualities and allowing the reader to learn about them more slowly. So overall not something that added anything to the overall feel of the book.


I really enjoyed the description, some of the scenes were really well described that I kind of wanted to skim over it, it really gave me the chills and freaked me out. The way the antagonist killed some of his victims was brutal and creepy, I will never get that airport scene out of my mind *shudders* I did feel that some of the scenes were over-described, like the author went into too much detail but thankfully that only happened in a couple parts of the book. As for the way he described things, I really like his attention to detail in certain parts of the book, the way he described the killings was necessary and though it can be morbid it did add more power to the overall message and feel to the story. As for the way the scenery and landscape was described, I felt he did a good job on creating rooms and places for the reader to really picture. Some of the best described landscapes were in the dream world; the reader was really able to see the incidents that took place within these dreams…it was really cool to see the contrasts between reality and the dream landscape…hard to describe, it is something you’ll just have to read about.


The style was different than I’m used to in the sense of how the story was organized. I did like the way he switched POV’s and he was very clear on the time period so it didn’t confuse the reader on where the scene was taking place and when. And I did like when he chose to switch POV’s, it really opened up the world so that the reader could get a better grasp on the situation and what was happening. The ending was definitely something I was only able to guess at till the mid-point! As for the writing itself, I had no problem reading it. So overall I liked the style of the book it just took some time to get used to it.


Quote of the book:


“A rock was overturned…A tree fell…A flower bloomed, and a voice sobbed its macabre refrain. A blade of grass withered…The stars disappeared…The eyes of many saw from the vision of one, yet none knew the answer of a needless demise.”


Detective John Yardley and FBI agent, Frank Williams are on a quest. They are determined to stop a manipulative, unknown mass murderer, whose targets seem to be specific politicians in a bizarre and maniacal killing spree...one that draws them into a world of dreams and nightmares beyond their wildest imaginations. Awaiting them are unbelievable terrors, chilling twists and turns, and a scope of destruction that they would never have believed possible.


I would recommend this to fans of psychological thrillers and to any readers who enjoy a good mystery. I enjoyed this book; creepy but so worth it. I think the nursery rhymes really added a good element to the book; definitely amped up the creep factor. There are some scenes I’ll take from this book that will ever be engraved on my mind but I really liked the story behind this whole ordeal and do believe the mind of the serial killer is very much alive in one of the citizens in this world today *shudders* I will definitely be looking into more books by this author; his writing has a way of getting under your skin whether you like it or not.

A Special Interview with Solitaire Parke


What inspired you to write this book?


The phenomenon of Out of Body caused me to wonder what you could do if that was possible.  The rest just kind of tumbled out.


Were there any scenes that scared you?


No, but there were some that I thought were funny.


Did you have to write with the lights on?


Only when the serial killer showed up with the next available chapter.


What was your beverage of choice while writing this book?


Coffee, and then coffee sometimes followed with coffee.  Did I mention coffee?


How long did it take you to finish the whole process of getting this book published?


Too long.  Quite a bit of reinventing the wheel and learning how not to do things.  Trust me, the journey is worth it.


Were there any scenes you had to take out?


No, but there were a few I had to re-write during the final edit.


Were there any songs that helped inspire this book?


I listened to a lot of nursery rhymes.  It eventually even creeped my family out.


If you could go anywhere in the world where would you go?


The Plateau of Giza.  I have some ideas for a future book.


What author inspires you?


If I had to pick just one...it would be Edgar Rice Burroughs because he was the first to make me see the possibilities.


Who gave you the greatest support during this whole publication process?


Easy.  My family.  Without them, it just wouldn't happen.

Thanks again Solitaire for taking the time to answer some questions, it was a joy working with you! And may your writing career ever blossom!
Posted by Laceyshoelaces at 7:10 AM