Echoes Between Us Review 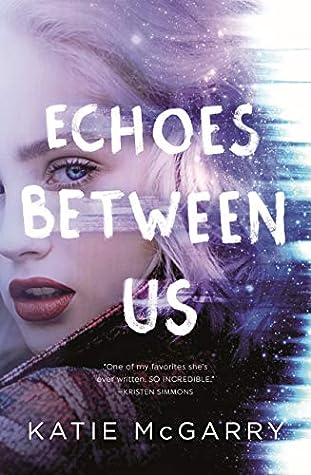 I quite honestly thought this book was going to go a different way by just reading the summary. But boy was I wrong. What looked to start as a typical ghost story turned into something much more Psychological. It was a deep down psychological and emotional story. it had parts that really grabbed me and parts that set me with unease. I saw that a lot of readers thought this was a great story but it didn't hit me right.

Veronica is trying best to keep the secret that she has a brain tumor. As innocent as she portrays the tumor to be, she thinks it would turn her world upside down if anyone besides her dad, a few friends and doctors knew about it. She especially doesn't want the boy that just moved into the apartment under her house to know.

Enter Sawyer, the picture perfect all star swimmer. But Sawyer has a secret of his own. One that is slowly consuming him, one that only he knows about. But Sawyer is one of the popular kids at small town high school. Secrets are bound to be told.

I thought this book would be more syfy and less emotional roller-coaster. It started in a typical manner, an opening scene of a breakfast between father and daughter. And Veronica has an obsession to prove, one she tells herself has to be real because if it wasn't meant something much worse. There's constantly a pull of emotions as characters come in and out throughout the story. It adds more dramatic pieces and slowly the plot thickens and causes the reader to want to want to read more; to stop only until the book ends. I mean the plot was good, took a turn I didn't anticipate but for an average reader, I think they'd like this book. My opinion is that it started off rocky but snowballed into something better by the end. I still have mix emotions about the story line. There was some dark scenes in this book, scenes that could cause a reader to want to put the book down. (at least that's what it did to me at parts.) Overall I can see how attractive the plot would be to most readers but like I mentioned above it didn't settle well with me.

The relationship between Veronica and Sawyer was unexpected in the way that they would fit together. To me they had personalities that would clash and yes it did at times. It kind of seemed too easy to pair the two, like it was predictable in that way. But in the end it was okay, not the shining aspect of the story.

Veronica was hard to connect with to me. She had a whole a lot of barriers up that made it hard for the reader to connect with. But as I got to know exactly what Veronica's life was like and how hard it was for her to deal with life's problems made it more connectable. But Veronica was a complex character, she had all of these beliefs that she thought were real and had such a tender heart. When I did connect with her, I became a fan of her. She was weak at times and others the bravest of souls.

Sawyer was a more rough kind of character. His personality had sharp edges that made it hard to understand. But as information was released throughout the story it was easier to understand him.

The rest of the secondary characters were introduced well and gave a good spectrum of personalities. Like Veronica's dad, he is not one of my favorite characters but then you get someone like Veronica, whose whole life is like balancing on a tight rope above a tank of piranhas. Definitely an interesting piece of the story.

Transformation of the Character:

Veronica definitely transformed as the reader was able to understand her. She had so much against her but those obstacles just pushed her over the edge. She had to break out of her "cocoon" because the alternative was way too dark for her. Sawyer did his own kind of transforming, I felt you didn't get his whole transformation by the end of the book but you were able to see some transformation.

The scenery was well crafted to allow the reader to imagine each part, allowing the imagery to be pasted to our minds. There were some intense moments and the reader was able to really imagine the scene as it played out. One of the best scenes was the where Veronica and Sawyer first went out looking for ghosts by the bridge. That scene really made the reading experience terrifying and fun. The emotional part of this book was well described, I found myself on the verge of tears at parts. It really grabbed the reader and allowed them to understand what the character was feeling and thinking in some serious situations.

This was written in first person, it allowed the reader to understand what was going on in the character's mind. The emotional connection was better suited for first person. This was meant to be a deep and emotional book and it wouldn't have made such an impact if it was in 2nd or third person. This was also written in two point of views; Veronica's and Sawyers. I loved that it was two different point of views, it allowed a wider range of emotional connection. As for the writer's writing it was well written and enjoyable. As much as I have bashed this book, the writing itself isn't one of the reasons I had a hard time of connecting with the story. The author has a way with words that causes the reader to want to continue reading even though it doesn't connect with the reader.

" "What's important is that you're comfortable with your body and how you decide to use it. If you want to kiss the boy and he wants to kiss you, you kiss. If you don't want to kiss the boy, you don't. Kissing is magical, but it's not magical enough to make your wounds heal. Only time can do that.""

Even though I had parts of the book I didn't like doesn't mean I hated the book. It had it's moments. I think I really started to connect with the story when the characters became more serious; more realistic. I enjoy this author's writing and will continue to read other stories by her. I really; truly hope you will enjoy this book, maybe it's me; maybe I'm the reason it wasn't my favorite. Worth a try, happy reading!

3 Blooms!
Posted by Laceyshoelaces at 6:57 PM